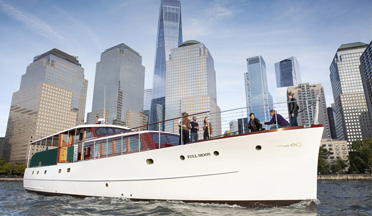 The Yacht Full Moon is a Grebe Yacht: What is a Grebe Yacht? Henry C. Grebe & Company was the successor to Great Lakes Boat Building, which had started in Milwaukee in 1915 and moved to Chicago in 1921. Grebe was famous for the style and quality of the leisure yachts he designed and built. It was located on the west side of the North Branch of the Chicago River, just north of the West Belmont Avenue Bridge. They built their last boat in 1970 but did not finally close until 1994. The Grebe yacht acquired by Classic Harbor Line, Full Moon, was a 65 foot production in 1950. Another 65 foot production they completed a decade later, was “Florencia”, later renamed, “Sam’s Place”, which was obtained by the famous actor and comedian, Jerry Lewis. Jerry used the boat for leisure and relaxing with family in the San Diego area. This photo of “Sam’s Place” is comparable to the spirit and look of Full Moon once she is fully restored.

Posted in | Comments Off on The Yacht Full Moon

Thanks for signing up!

Looking for a unique gift to give your friend or loved one? Classic Harbor Line has a variety of cruises that will make the most perfect gift.
BUY GIFT CERTIFICATE

SEE OUR CALENDAR OF EVENTS

Have a specific date you would like to join us for a date night, Anniversary, or Birthday? Check out our online calendar.
VIEW ONLINE CALENDAR

Sail out from Rowes Wharf and impress your guests. Step aboard one of our classic vessels for a private charter. These yachts are perfect for Corporate outings, Birthdays, Anniversaries, Weddings, Team Building and more. Read more »

Sail out into NY Harbor and impress your guests. Step aboard one of our classic vessels for a private charter. These yachts are perfect for Corporate outings, Birthdays, Anniversaries, Weddings, Team Building and more. Read more »